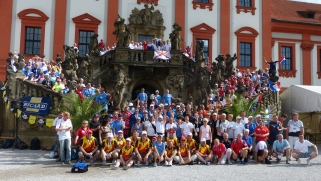 This year, we had the honor to organize a pétanque tournament for the 19th annual European Company Sport Games (http://ecsg2013.eu), which took place in Prague in June 2013. The event’s organizers and participants will surely remember it for a long time to come. Just a week before the tournament, it wasn’t at all sure whether it could be held in the gardens of the Troja Chateau, since the park had been under two meters of water during the recent flooding. Fortunately, everything worked out; there aren’t many places in Prague capable of hosting so many participants. Thursday, June 20 was dedicated to doubles teams, with a record 152 teams participating – making the tournament the largest such undertaking in the history of pétanque in the Czech Republic. Friday, June 21 some 87 teams participated in the triples tournament.

Don’t know anything about pétanque? Want to learn more? Here you will find basic information and interesting details.

You can also download our UBULODROM flyer (PDF; 2.9MB)

The UBULODROM – the largest indoor pétanque court in the Czech Republic – represents a unique symbiosis between a brewery and pétanque. The indoor court is the result of efforts by Pétanque pro Vás (Pétanque for You) and the local pétanque club "UBU – United Balls of Únětice", and was built inside the newly reopened Únětice Brewery thanks to the owners’ understanding and support.

The first balls were thrown on 11.11.2011 at 11:11am and 11 seconds. Since then, the court has been significantly improved for our guests’ comfort!

The UBULODROM is located near Prague in the village of Únětice - the sovereign realm of the Kingdom of UBU, meaning that it is subject to the local laws :)

Come and work up an appetite with pétanque, and enjoy excellent unfiltered Únětice beer and fine specialties in the brewery’s non-smoking restaurant www.unetickypivovar.cz

-  every Tuesday from 3 to 5pm: open practice for seniors from Prague 6 (free)

Since changes may occur, so please always call or write in advance if you are planning on coming.

Groups can also reserve time outside of our regular hours. The UBULODROM reserves the right to change its opening hours in case of private events.