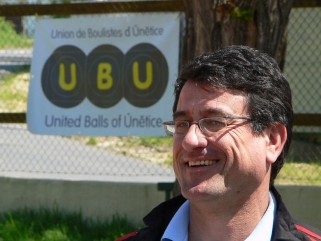 Czech players completed with 4 Danes, 2 French, 2 German participated on 2014, 2015 and 2016, Ukainian woman national team on 2017 and one french and one german group on 2018 in the five workshops held by France's C.I.E.P. outside of Burgundy. The workshops were led by Claude Raluy and was co-organized by "Pétanque pro Vás", official C.I.E.P. license holder. The limited capacity was filled quickly. It isn't easy to maintain one's focus and enthusiasm for pétanque for 4 days of hard work, but the combination of a great group of people, an individual approach to each player, and an interesting program made it possible.

Every morning, the participants were filmed on video to see what changes they had achieved over such a short period of time. Theoretical instruction was mixed with workshops, the individual adjustment of proper poses, tactics and games, all of it spiced up with competitive play. For the organizers, the greatest reward was the participants' joy from having improved their skills. Profit from the third workshop organized at the Ubulodrom, the largest indoor pétanque court in the Czech Republic!
Workshops 2017

The workshop will be organized between 21.-24.2.2019. In individual cases it might be possible to pass only two days of workshop (21.-22.2. or 23.-24.2.2019) in case of availability of places. But based on the experience from the previous years we highly recommend you to pass all four days as the results are considerably better.

opened for all players, not only for players who know C.I.E.P. method from a previous workshop in France or in the Czech Republic.

Photos and video from previous stages

Don’t know anything about pétanque? Want to learn more? Here you will find basic information and interesting details.

You can also download our UBULODROM flyer (PDF; 2.9MB)

The UBULODROM – the largest indoor pétanque court in the Czech Republic – represents a unique symbiosis between a brewery and pétanque. The indoor court is the result of efforts by Pétanque pro Vás (Pétanque for You) and the local pétanque club "UBU – United Balls of Únětice", and was built inside the newly reopened Únětice Brewery thanks to the owners’ understanding and support.

The first balls were thrown on 11.11.2011 at 11:11am and 11 seconds. Since then, the court has been significantly improved for our guests’ comfort!

The UBULODROM is located near Prague in the village of Únětice - the sovereign realm of the Kingdom of UBU, meaning that it is subject to the local laws :)

Come and work up an appetite with pétanque, and enjoy excellent unfiltered Únětice beer and fine specialties in the brewery’s non-smoking restaurant www.unetickypivovar.cz